A Modern Rail Link for Newburgh

The campaign to get a new rail station in Newburgh is being organised by newburghtrainstation.org.uk. NCT has always been supportive of this campaign, and in view of news emerging in December 2015 that the case for a station has been backed by a new passenger feasibility study has now agreed a formal cooperation between the two groups to ensure getting the best out of our joint resources. For any further information, or to offer to help with the campaign, contact Andrew Arbuckle on 01337 870209 or andrew@andrewarbuckle.org. 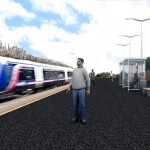 Modern planning considerations meant it was never feasible to restore Newburgh station to its former glory, but a well-used modern rail halt would be a huge boost to the status of Newburgh and to the local economy. The picture above is an impression of how the new facility might look.

. Get Involved And Make Newburgh A Better Place